Latest News from
​the Byrd Center

​The Robert C. Byrd Center for Congressional History and Education is partnering with the League of
Women Voters of Jefferson County to host two virtual events in a series entitled “How Representative is our Democracy?” The events will take place live on Zoom on Thursday, February 25, 2021 and Wednesday, March 10, 2021, each at 7:00 pm.

How representative is our democracy? Coming out of the historic 2020 election, many people are examining the United States' electoral system more closely than ever, leading us to consider whether our present systems for voting and electing public servants are truly representative of the will of the people.

In the first event on Thursday, February 25, 2021, Neal Barkus, President of Conservation West Virginia, Inc., and author of the blog Panhandle Progressive, and Dr. Ray Smock, Byrd Center Interim Director and former Historian of the United States House of Representatives, will discuss the history of the Electoral College, the existing framework for our national elections spelled out in the Constitution. Barkus and Smock, each having studied and written about the Electoral College, will reflect on the shortcomings of this system in representing the will of American voters historically and contemporarily, setting the stage for the discussion of election reform which will be featured in our second event in the series.

The second event on Wednesday, March 10, 2021 will feature Dr. Mark Brewer, Professor of Political Science at the University of Maine who will discuss ranked choice voting, an election reform method that is being implemented in states across the nation. Brewer has written extensively about political behavior and institutions, examining the impact of partisanship on the electoral process. His scholarship and experiences in Maine where ranked choice voting was implemented for the first time during last November’s election will offer attendees a first-hand perspective of how this election reform can impact the voting process and its outcomes.

Both events will be conducted via Zoom and offer attendees the opportunity to ask questions of our speakers. You must RSVP in order to receive the Zoom link to join the events live, which you can do by visiting byrdcenter.org/how-representative-is-our-democracy. Visit this link to access resources from our speakers and introductory information to ranked choice voting. You may also RSVP by calling the Byrd Center’s office at (304) 876-5648.

The Robert C. Byrd Center for Congressional History and Education is a private, nonpartisan, and nonprofit educational organization located on the campus of Shepherd University. Its mission is to advance representative democracy by promoting a better understanding of the United States Congress and the Constitution through programs and research that engage citizens.
Download a PDF of this Press Release
February 2, 2021

Community Invited to Join Friends of the Byrd Center

The Friends of the Byrd Center, a local group of citizens, announced this week that it has raised $100,000 toward its $200,000 goal to support the Robert C. Byrd Center for Congressional History and Education, located at Shepherd University.   This Friends campaign was boosted to its halfway mark by the end of 2020 with a gift of $60,000 by an anonymous donor to match every dollar raised. This generous matching offer to double the value of each donation will continue into 2021 as the campaign ramps up to reach its goal of $200,000.

Lisa Welch, a member of the Byrd Center’s board of directors, who encouraged the Friends of the Byrd Center to lead this fundraising effort, said, “It’s incredibly gratifying to see the Shepherdstown community’s generous ongoing support of this valuable community asset.”  The chair of the steering committee Marianne Alexander, another board member, said, “The success of our fundraising campaign in a few short months clearly shows that the Byrd Center is a vital part of the fabric of our community and the university.”

For many area residents, the Byrd Center is Shepherdstown’s center for civic engagement where free public programs feature lectures, book talks and film screenings on current policy issues that relate to the history of Congress and the U.S. Constitution.  The Byrd Center Auditorium is also a meeting place for a multitude of community groups.  Many area residents attend Shepherd University’s Lifelong Learning classes in the Byrd Center’s auditorium and classrooms.

Shepherd students serve as interns at the Byrd Center’s political archives to gain the knowledge and skills that lead directly to careers in public history and archival work.   The Center’s staff uses the archives for teaching materials that enliven and enrich civic education for WV high school students as well as for their teachers through the Center’s grant-supported teacher institutes.
The Robert C. Byrd Center for Congressional Education and History is a nonprofit organization on the campus of Shepherd University. Originally sustained by Congressional appropriations, the Center’s future depends on private donations and competitive grants to continue its programs. Current funding will expire by the end of 2022.  Learning of this impending budget shortfall last summer, the Friends of the Byrd Center began planning a fundraising campaign to raise $200,000.  This sum will give the Center an additional year to establish a more diverse funding base that will provide continuing financial support for its staff and maintain its current program offerings. ​

Now, we need members of the community to close the gap. Donations to the Byrd Center can be made online at www.byrdcenter.org , or by check payable to “The Byrd Center” and mailed to: The Byrd Center for Congressional History and Education, PO Box 5000, Shepherd University, Shepherdstown, WV 25443. Contributions are tax deductible.
Download a PDF of this Press Release
January 28, 2021 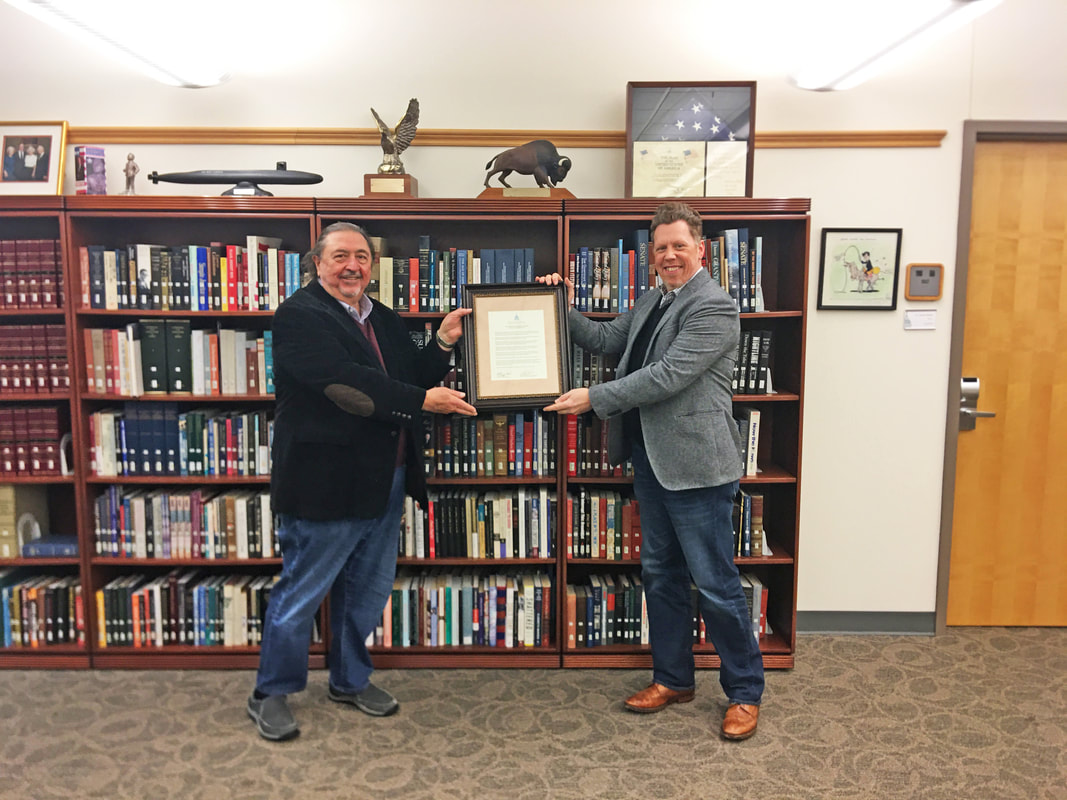 Dr. Ray Smock (left) presents a resolution of the Congressional Education Foundation to Dr. Jay Wyatt (right) in recognition of his leadership of the Byrd Center.
​The Robert C. Byrd Center for Congressional History and Education announced today that Dr. Jay Wyatt will resign as Director effective February 1, 2021. Wyatt will join the staff of the National Archives and Records Administration's Center for Legislative Archives in Washington, D.C.

Wyatt joined the Byrd Center staff as Director of Programs and Research in 2013 and led the development of numerous popular public program series, exhibits, and educational initiatives.  In 2018, he was named Director following the retirement of the Byrd Center’s Inaugural Director, Dr. Ray Smock.

Joe Stewart the Chairman of the Byrd Center’s governing board said “while we are sorry to lose the outstanding service of Jay Wyatt at the Byrd Center, the Board is thrilled with the national recognition of his unique talents. We extend our heartiest congratulations to Jay.”

The Byrd Center’s board of directors unanimously passed a resolution of distinguished service at its meeting on January 27, citing Dr. Wyatt’s many contributions to civic education and public outreach through the Center’s programs and research. The board earlier promoted Mr. Jody Brumage, the Center’s Archivist and Office Manager to the position of Director of Education and Outreach in recognition of his leadership role in the Center’s educational programs.

Dr. Ray Smock, the Byrd Center’s Director Emeritus, will return as Interim Director. Smock served as the Center’s director from 2002 until his retirement in 2018. Smock was the Historian of the U.S. House of Representatives from 1983-95. Chairman Stewart extended special appreciation to Smock for “generously agreeing to resume the directorship of the Byrd Center.”

The Robert C. Byrd Center for Congressional History and Education is a private, nonpartisan, and nonprofit educational organization located on the campus of Shepherd University. Its mission is to advance representative democracy by promoting a better understanding of the United States Congress and the Constitution through programs and research that engage citizens.
Download a PDF of this Press Release
November 20, 2020

The Robert C. Byrd Center for Congressional History and Education has produced a series of 6 video lectures that explore the immense struggle to overcome systemic racism and achieve racial equality for Black Americans from the efforts to end of the institution of slavery in the nineteenth century to the enduring fight for equality that exists today. This highly acclaimed educational series of lectures is entitled “Of, By, and For the People: Congress and the Fight for Racial Equality in America,” and it is available now at no charge to the public on the Robert C. Byrd Center website: byrdcenter.org/of-by-and-for-all-people.

In keeping with the goals of the Robert C. Byrd Center, the lecture series focuses on Congress’ position at the center of historic debates on racism and equality in America, highlighting the instruments and institutions of representative democracy that have been crucial in our long national fight to become a more perfect union. The 6 video lectures are 40 – 90 minutes in length. They are “Slavery, Civil Rights and the Gag Rule Debates in Congress,” “To March Ahead of His Followers: Charles Sumner and the Civil Rights Act of 1875,” “No Innocent Bystanders: The Power and Responsibility of Local Action,” The Bill of the Century: The Epic Battle for the Civil Rights Act,” “From the War on Poverty to the War on Crime,” and “The Shame of America: the New Deal Senate and the Federal Anti-Lynching Bill.”

​Included on the website is a selection of educational resources, archival documents and lesson plans for exploring the struggle for African American Civil Rights from the Byrd Center Archives as well as the National Archives and Records Administration and the Library of Congress. The lesson plans are designed for secondary level students and are applicable in civics, history, social studies, or government courses of instruction.

A private, non-partisan and non-profit educational organization located on the campus of Shepherd University in Shepherdstown, West Virginia, the Robert C. Byrd Center for History and Education advances representative democracy by promoting a better understanding of the United States Congress and the Constitution through programs and research that engage citizens.
Download a PDF of this Press Release